Are you an empath or a sympath? The differences and definitions of empaths vs sympaths and how to tell which one you are.

What is an Empath?

An empath is someone with a supernatural ability to feel the mental, emotional, and sometimes even physical state of others.

Many empaths don’t understand that they have this gift. Therefore they are very vulnerable to the push and pull of other’s strong emotions.

Without the proper energy tools to stay grounded, centered, and delineated from other’s energies, empaths often use addictive substances to cope with other’s feelings.

Learn how to properly protect yourself as an Empath! Click to Read: 5 Little-Known Empath Protection Tools that are Powerfully-Effective

Empaths often experience feelings of depression, anxiety, and low self-worth. Most of the time these feelings were never the empaths in the first place. 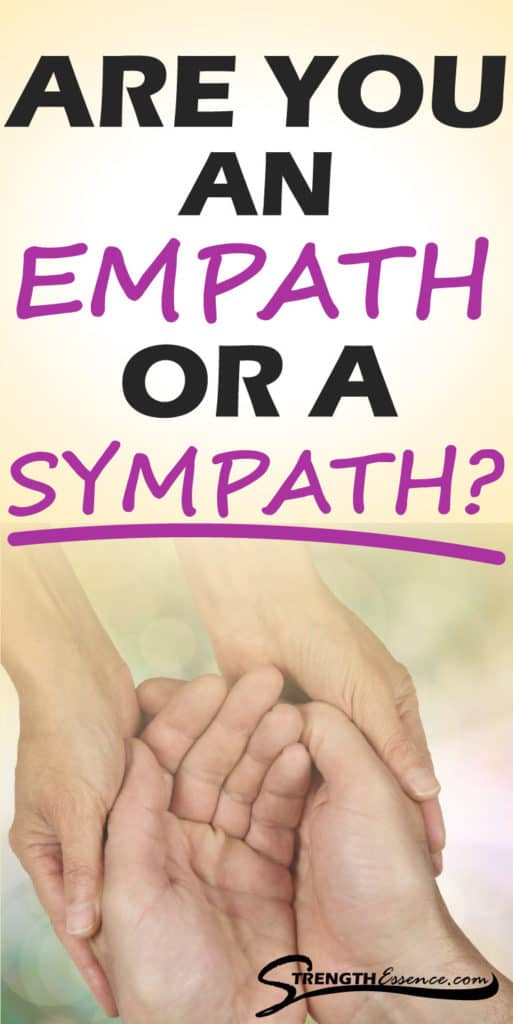 What is a Sympath?

Sympath is a relatively new term which simply means, a person who understands sympathy on a higher spectrum than most people, but does not literally feel their emotions, and therefore is not ruled by them.

Sympaths see the suffering of others and deeply care, but other people’s suffering does not throw them into their own depression or suffering.

Sympaths have the ability to demonstrate extreme compassion and sympathy. Their understanding and unconditional love of humanity is almost Christ-like.

1. Empaths can quite literally feel the emotional highs, lows, and imbalances of others. Whereas sympaths do not.

Empaths usually take their energy and shift it into other’s auric fields in order to sense what they are feeling, match that vibration, and then relate to the individual.

If you are an empath, or think you might be, you may notice yourself doing this when you come across anyone who seems hurt, depressed, or angry.

You sort of lean into them to get a read on what their energy feels like. You stop focusing your attention point within your own space and move your awareness towards the other person.

Once you know how they’re feeling, you bring your attention point back to yourself.

I had no idea I was doing this, but now that I’m aware of it, I catch myself doing it all the time.

Sympaths understand and sympathize deeply with the plight of others. They seem to have a supernatural talent at seeing, understanding, and not judging other people’s flaws.

Both sympaths and empaths are usually the first people there when someone needs a helping hand.

Empaths have huge hearts and want to end human and animal suffering. They tend to want to take care of and uplift everyone but themselves.

This is usually to the detriment of the empath, since they often neglect their own needs in lieu of others.

3. Empaths have an extremely hard time saying “no” to others. Sympaths are helpful when they can be, but not at the expense of themselves.

Because empaths can feel the emotions of others, they tend to be “people pleasers”. They don’t want to feel the negative emotion of the person who they’ve said no to not getting their way.

People who are emotionally hurting or unbalanced tend to look to the empath for emotional support, because empaths will usually give it.

They “tune in” to the person’s feelings and will often relate to them, saying things like, “I know how you feel”, etc. etc. This can all be very draining for an empath who hasn’t awakened yet and doesn’t even know this is happening. In other words, they are unaware that they are matching others low vibrations in order to relate.

Sympaths do not need to match the vibrations of others nor give everything to please others because they don’t have to feel other’s emotions in response to their actions.

They usually have less of a problem saying “no” if they are simply overextended or need self-care.

4. Empaths get easily overwhelmed with loud noises, or watching anything with excessive negative emotion (such as the news). Sympaths are more observatory when they are in these situations.

Empaths are highly sensitive to excess emotions such as; mistrust, judgment, fear, and any negativity in general. Hence, anything having to do with violence, fear, lying, or malicious intent is hard for an empath to be around, such as news.

Sympaths are able to see and sympathize with what is going on around them, but not internalize other’s feelings and emotions.

Both empaths and sympaths may want to send money and support to help whoever they see suffering on television. But the suffering that empaths see will likely keep them up at night and follow them for days.

Therefore, if you think you may be an empath, it is best to watch and read positive material. Turn off the tragedies, horrors and fighting, and watch compassionate, human interest stories instead.

5. Empaths are often introverts and have trouble in crowds. Sympaths are usually more extroverted and don’t have a problem being the center of attention.

Growing up as an empath, big crowds were always very difficult for me to be in (especially big retail stores!). I preferred going into nature alone or with just one or two people.

Nature is an empath’s happy place where all they feel is the zen that surrounds them. Nature nurtures and energizes everybody but is especially important for an empath.

Nature helps us ground and rids us of toxic energy and emotions. The empath can release what they’ve been carrying (most often emotions that aren’t theirs).

Sympaths are usually fine being in large crowds and have no problem being extroverts. My father is a wonderful example of a sympath. He is warm and caring, but never to his own detriment. He has no problem with crowds or large groups of people and often flourishes as the center of attention.

6. Many empaths are animal lovers and often like to rescue animals. Sympaths are usually more “tolerant” of animals and don’t want to see them suffer. But most sympaths don’t go out of their way to find and rescue animals.

It is extremely hard for an empath to watch any animal or child suffer. It is especially hard for empaths to watch animal rescue and shelter commercials without getting down.

A sympath will sympathize with the plight of the animal, but not really give it a second thought after the commercial is over.

This is not to say that a sympath can’t be a wonderful animal owner and lover. Many often are, but they tend to just have one, or at most, two animals they care for. They don’t become entangled in the animals emotions or physical problems, and they don’t feel the need to rescue all animals.

7. People tend to tell empaths their life story even when they don’t know them. People may reach out to sympaths for support or advice, but usually just close friends.

Empaths are wonderful listeners and empowered empaths who know how to protect themselves make excellent counselors, healers, guides, and friends!

Empaths are often sought out for their innate ability to understand what others are going through because no one likes to feel alone.

I often get asked for advice in grocery stores by people I’ve never met before. Or people like to tell me about their lives (in a lot of detail, LOL!) as I’m checking out.

As long as the stories are upbeat, I find this amusing and wonderful, but have a super hard time hearing others strife.

I find myself quickly reverting to the “old me” that wanted to rescue everyone and everything and have to remember to use my empathic protection tools.

Sympaths are there for people when really needed as well. But, a true sympath will only be there for others up to a point.

Sympaths realize that sometimes the best way to help someone is to help them help themselves. If an empath or anyone for that matter is constantly fixing someone else’s problems and always making them feel better when they are down, they’ll never learn to do it on their own.

Both empaths and sympaths are wonderful teachers and helpers of humanity and the world. Just because a sympath doesn’t actually experience the emotions and pains of others, doesn’t mean that they can’t assist that person in a very real way.

Sympaths have a deep understanding of the human condition, but are much better at emotionally detaching from pain when it is not theirs.

Sympaths also have an amazing ability to care about others without being dragged down by it. This makes them great volunteers, nurses, counselors, and healers as well.

With the right empathic protection and energy clearing tools, the ability to sense what others are feeling without running it through your own body is a great gift for an empath!

Empaths can easily relate to others as they’ve probably experienced the entire spectrum of human emotions. The good, the bad, and the super ugly!

Both empaths and sympaths can easily shift into being powerfully psychic awakened individuals by living a life of balance, taking care of themselves, and using these Psychic Development Tools.

Meditation is extremely important for both sympaths and empaths, but especially for empaths!

I highly recommend learning to meditate as a way to center within yourself and recharge from the draining effects of others.

Black Onyx helps release negative emotions. Amethyst increases psychic ability and intuitive powers plus it promotes a calm mind and deep sleep. Amethyst also cleanses the aura and chakras and dissipates negative energies. And Black Tourmaline is a powerful stone for protection against negative energy of all kinds, as well as being a strong spiritual grounding stone.

Check out my Mindfulness Meditation Ultimate Beginner’s Guide for some great information on learning to meditate!

And, you can also check out my favorite Ancient Meditation Technique for Reaching Higher States of Consciousness! This mediation technique is great for deeply relaxing and calming down at the end of a stressful day. Plus, it is super easy to do!

Are you an empath, sympath, or a highly sensitive person? Are you awakening and learning how to manage yourself and your energy? What empathic protection tools have you found to be the most helpful? Comment and share below!

Trying to MANIFEST, but getting VERY WEAK results?