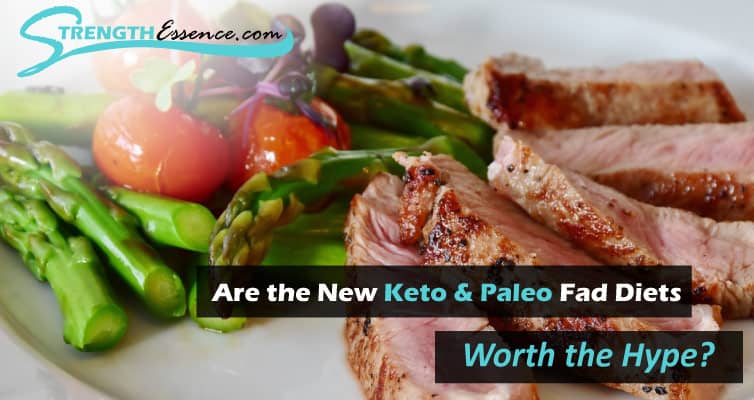 Ready to lose the baby weight, I decided to look into some of the newest Keto and Paleo fad diets grabbing everyone’s attention. Here are some Pros and Cons of both the Keto Diet and Paleo Diet…

It seems that every decade we get bombarded with the latest diet trends that limit certain foods in favor of others and boast being “one size fits all” in helping everyone lose weight and regain their health.

In my lifetime, I’ve come across many fad diets and even tried some of them. In the 80s, there was the “all fat was bad” diet. Housewives cut out cheese, lard, butter, and oil, and clamored to buy low-fat cookies, cakes, and crackers. The problem with this was that all the low-fat fare was loaded with preservatives, sugar, and simple carbohydrates.

Then came weight loss supplements (like mini-thins) and supposed prescription wonder drugs such as Phen Fen, which were really like legal forms of speed and terrible for the body, causing heart problems and even death in some cases.

Next, came the Atkins and South Beach Diets, which weren’t bad if you read the actual books and didn’t just assume you ate bacon and cheese all day to lose weight and get healthy. I tried my version of the Atkins diet, which consisted of lots of meat (mostly processed), pickles (low in carbs), whipped cream in a can (also low in carb and because I was a 20-yr-old idiot) and loads of cheese! A lot of days, my breakfast consisted of pepperoni, cheese slices, a pickle, and whipped cream straight out of the can! (Again, because I was a 20-yr-old idiot).

I’ve since read the Atkins book, and this is not the Atkins diet! I did lose weight because it was low in carbohydrates, but I was by no means healthy and did not feel good from eating this way.

Fast forward to the Keto and Paleo Diets

And, most recently, I’ve ran across the Paleo, Keto, and meal replacement diet plans. As tempting as they sound, something wasn’t quite adding up for me in terms of my long-term health goals.

According to Wikipedia, the Paleo, or Caveman Diet “is a modern fad diet requiring the sole or predominant consumption of foods presumed to have been the only foods available to or consumed by humans during the Paleolithic era.”

The Paleo Diet consists of wild and grass-fed game meat as well as varieties of fresh vegetables, fruits, eggs, nuts and seeds. While it excludes foods such as grains, legumes, dairy products, salt, refined sugars, flours, and processed oils. Although, even the experts don’t completely agree on what diet Paleolithic humans ate. (1)

The Ketogenic, or Keto Diet for short, has been around since 1921. It consists of a high-fat, adequate protein, low-carbohydrate diet. It became popular in the 90s when it was clear that the diet helped control epileptic seizures, especially in children. (2)

People often feel better when switching to Keto or Paleo Diets, simply because they are cutting out processed foods. Foods such as white flour and  white sugar are heavily processed to take all the nutrients out. What you are left with is a spike in blood sugar and then a subsequent crash later. This makes you feel sluggish, tired, and ready for a nap!

Since I’ve began receiving Divine Guidance to help guide my life, meditations often reveal a certain food for help with health concerns. Many of these foods do not fit in to the current fad diet’s strict guidelines. For example, I heard, “yogurt,” when I had a yeast infection, which wouldn’t work with a Paleo Diet. Other examples of foods recommended during meditations were “barley and oats”. Which were suggested to help me produce enough breastmilk while lactating. These foods wouldn’t fit into the Keto or Paleo Diets.

Other things I’ve heard while meditating that concerned a healthy diet and lifestyle were, “Organic, whole-foods” and the song, “Shake that body for me!” Another bit of wisdom I’ve picked up while meditating is “Balance and moderation in all things.” Oatmeal was suggested to me to increase my breastmilk supply, but not 3 times a day!

Meal replacement plans don’t give you the fresh organic whole-foods, just calorie restriction, which can be accomplished just as easily with portion control. Many of the meal replacement bars contain chemicals called “sugar alcohols”, which are not supposed to spike your blood sugar levels. However, these are not organic, whole-foods, so I steer clear and opt for organic, raw honey, agave, or maple syrup for my sweeteners.

How to Lose Weight while Eating More Variety

So, to lose the baby weight, I’ve adopted a diet of organic fresh whole-foods full of color! I eat mostly vegetables, then fruits, as well as nuts, seeds, grains, yogurt, cheese, and organic grass-fed meat. I limit my carbohydrate intake and choose whole grains, such as brown rice or barley that I cook for hours myself. I squeeze in at least 20 minutes of exercise per day, even if it’s just a walk. I drink plenty of purified or spring water. I’ve cut out things that don’t belong in my body – Alcohol, nicotine, white flour, processed refined sugar, and preservatives.

And finally, I portion control! This was a huge problem for me! I was consuming way more food than I could possibly burn off! In a nation of excess and technology, it is unsurprising that many are consuming more calories than they are burning off through exercise. We all know that consuming more calories than we are burning off equals weight gain, plain and simple. Also, when you eat whole-foods that are nutrient dense, you don’t need to eat as much as when you’re eating refined, processed foods that have little to no nutrients.

With the help of prayer, meditation, and Divine Guidance, I’ve ditched the fads and am eating a wide variety of delicious organic whole-foods in moderation.

In conclusion, I’d recommend the Keto or Paleo Diets if you want to jump start your weight loss, or if you have a gluten allergy. I also love the Paleo and Keto dessert recipes being shared online! Desserts that are low in carbs and high in nutrients are still amazing! But, severely limiting the foods you eat by adhering to one of these diets may be difficult to sustain for long-term weight goals.

Learning to pray and meditate for answers was key to keeping me happy, healthy, and balanced. Find out more here…

** Medical Disclaimer. … This Content is not intended to be a substitute for professional medical advice, diagnosis, or treatment. Always seek the advice of your physician or other qualified health provider with any questions you may have regarding a medical condition. **

4 Replies to “Worth the Hype? Keto and Paleo Diet Breakdown”

Trying to MANIFEST, but getting VERY WEAK results?